Tools in weaving a Persian rug 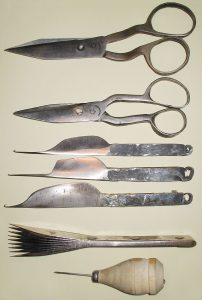 some of the tools used to weave a persian rug

Some traditional tools to weave a Persian rug.

The weaver needs a number of essential tools: a knife for cutting the yarn as the knots are tied; a heavy comb-like instrument with a handle for packing down the wefts; and a pair of shears for trimming the pile after a row of knots, or a small number of rows, have been woven. In Tabriz the knife is combined with a hook to tie the knots, which speeds up work. A small steel comb is sometimes used to comb out the yarn after each row of knots is completed.

to weave a Persian rug a variety of additional instruments are used for packing the weft. Some weaving areas in Iran known for producing very fine pieces use additional tools. In Kerman, a saber like instrument is used horizontally inside the shed. In Qom, a nail-like tool is inserted between the warps, and beaten on in order to compact the fabric even more. Qom is also famous for their wet loom technique, which consists of wetting the warp, weft, and yarn with water throughout the weaving process to compact the wool and allow for a particularly heavy compression of the pile, warps, and wefts. When the rug is complete and dried, the wool and cotton expand, which results in a very heavy and stiff texture. Bijar rugs are not easily pliable without damaging the fabric.

A number of different tools may be used to shear the wool depending on how the rug is trimmed as the weaving progresses or when the rug is complete. Often in Persian rugs the yarn is trimmed after completion and the trimming is slanted where the color changes, giving an embossed three-dimensional effect.

Although all the Persian rugs on MJ rug are woven by hand and are hand-made but we do not use tools you saw here, we use more developed tools and they are being used by professionals who have been weaving Persian rugs since they could hold the tools!

What is a Persian rug made of?